Rock Chorus is a sensational sell-out 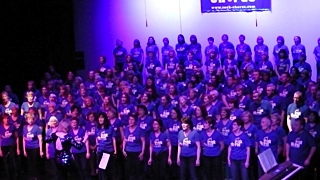 Rock Chorus rocked the rafters for the fifth year running at their annual Big Gig for the Lions Club of Bletchley. 120 singers took to the stage for two sensational 45 minute sets that had the audience dancing in the isles. Lauren's daughter India Foskett,  wowed the audience in between sets with her fabulous voice and a rendition of the Alicia Keys song, If I Ain't Got You.  This year saw our debut at a bigger theatre The Venue in Milton Keynes and the performance was a sell out raising over £4000 for the Lions Club's good causes including the local charity SNAP.

We are delighted to announce that The Venue has been booked for our next two Big Gigs - April 16th 2016 and March 18th 2017.
Back to News Archive